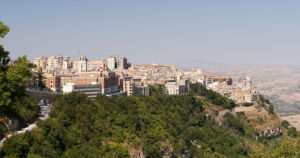 Also called „Sicily’s belvedere“, Enna is the highest province capital in Italy; located (more or less) in the centre of the island, this ancient city offers outstanding panoramas over the Sicilian countryside as well as an enchanting atmosphere that recalls the ancient cultures and dominations that left their invaluable legacy and imprinting. Other nicknames of the city include „Urbs Inexpugnabilis“ (impregnable city, from the Romans), „the navel of Sicily“ because of its central position; until the early 20th Century, the city was known as Castrogiovanni. First evidence of the human presence in the area date back to the Prehistory; the city, as the whole island itself, was then occupied by Sicels, Greeks, Romans, Arabs, Normans, Svevians, Spanish – its peculiar position made it the stronghold „par excellence“. Nowadays, Enna is a lively city, most famous for its castle, the Temple of Ceres and the Dome, as well as its „Kore“ University. To organize your trip to Enna, we advise you to check out one of our Holiday rentals in Sicily catalogue.

The historical centre of the city is located in its upper part, „Enna Alta“, whereas „Enna Bassa“ houses the most modern neighbourhoods. Enna Alta was inhabited way before the Greek domination, as the archaeological findings from the Fourteenth Century b.C. clearly prove, and is nowadays the most interesting area of the city: plenty of beautiful landmarks can be found here, as well as a large number of peaceful panoramic viewpoints over the verdant countryside.

Visiting Enna and the whole central Sicily often means going off the beaten track for most travellers, mainly focused on the coastline; however, thanks to its ancient history, the city of Enna (and its surroundings) boasts a huge number of beautiful landmarks and a remarkable historical heritage, which can be admired by following the main axe of the city centre, Via Roma. This street goes through the five main squares of the city and is sided by great palaces and monuments, such as the Dome, an impressive evidence of Medieval architecture in Sicily and the core of the sumptuous and extraordinary celebrations of the Holy Week, and ends up right in front of the Castello di Lombardia, undoubtedly the most famous and important landmark of the city. The panorama from this towering castle is utterly breath-taking: the sight wanders from the Madonie Mountains (in the province of Palermo, check out our villas in Palermo to rent) to Mount Etna – ideally please visit our catalogue of villas in Taormina or Catania holiday rentals – from the lovely Pergusa lake to the whole central-eastern countryside of the island. A jaw-dropping panorama can be also enjoyed from the Rocca di Cerere, the easternmost spur of the city, a religious spot since the XIV Century b.C. of which an ancient sacrificial altar can still be observed.

The surrounding countryside is made of yellowish or verdant hills studded with tiny ancient farmhouses and crossed by “trazzere”, tiny old streets mainly used by farmers and shepherds, but these gentle hills often hide wonderful invaluable treasures – such as the “Villa Romana del Casale”, a UNESCO World Heritage Site located in Piazza Armerina, just 30 kilometers far from Enna, surrounded by eucalyptus woods. The ancient Roman villa contains the widest, richest and most complex collection of jaw-dropping Roman mosaics, that have recently been restored and made even more enjoyable. An incredible collection that will leave you undoubtedly speechless.